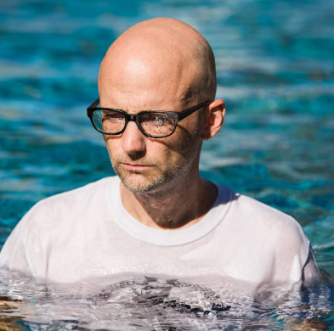 American Artist & Song Writer Moby, has taken his frustration of the “Inauguration of Trump” out on Turn coat Democrats, Republicans, Green Party & 3rd party voters, by posting this meme below.  Upsetting several of his long time fans. 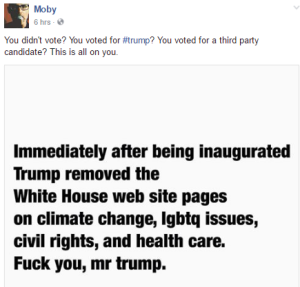 And what surprised me was that they were from all walks of life & were Democrats, Republicans, Green & 3rd Party voters, who were equally upset in Moby’s post.

There’s nothing wrong with having an opinion…But when a celeb starts stirring an already full pot and starts pointing the finger in regards to Politics, yet spoke nothing about the state of the economy, or spoke out on Benghazi or the False Flags that led us to war.  But when the Primary’s and the Elections come around you have a voice for the people when it comes to Politics. But don’t stand up when it counts the most.

Nobody wants to speak on what happened to the Bundy’s and their supporters at that ranch in Nevada along with several other families trying to protect their land from being seized illegally by the Government, citing eminent domain.

Barely any Celebrities if any spoke about the Dakota Access Pipeline and the Native Americans who stood there for days defending their “Government Given Land”.  That Pipeline would have poisoned the land and in turn their water supply.

What’s really the icing on the cake in regards to this story is the answer as to why he couldn’t find the link.

The Website had been archived, as it is a standard practice to do in cases of transitions.  So now not only is he an idiot, he looks like one as well.

If you analyze Moby’s words he’s basically saying we should have stuck to a two-party system, instead of wasting votes on Independent Candidates. Which is insane, because as Americans, we’ve come to enjoy the right to have a voice and a choice.  And who’s to say a 3rd party or a Green Member couldn’t win.  This is America!

If more people recognized we did have other choices maybe they’d pay more attention to whats going on in Politics.  And not just when its convenient around choosing which candidate, but all the time.  I never stop reading and educating myself on what going on in the World, especially America.