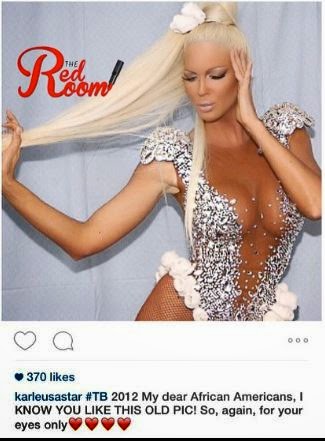 First off uhhhm that look’s nothing like her dress.  You look like Busty the Clown in this Get-up you got on.  First off you white as rice in you out here in this garment which mesh doesn’t even match your skin tone so you look crazy.
So if Beyoncé came out in white mesh and brown skin then I could see where you was coming from.  If she was tacky then yes you would of been right.  If you gone come for Beyoncé drop name’s. Who made that outfit you wearing,  I can tell you who made Beyoncé’s , it was Givenchy.

Khia done lost her dang mind talking about Beyoncé jocked her style…. First off this garment you have on looks like some back room lingerie catalog or a costume from finger hut Hell and have the nerve to put it side by side to Beyoncé and compare.

I don’t even care for Beyoncé like that but bish you are clearly a hater, who’s delusional to believe she’s anywhere in your radar, I highly doubt anybody around her even stopped to get her response to your buffoonery.  “So Beyoncé what do you think about Khia and what she has to say…I can’t even fathom the thought.. SMDH ..As my good friend Bop would say “Some people give themselves to much credit” (#Bop). Oh Yea who made your travesty?

#BiatchPlease Moment Brought to you by Mobetta.