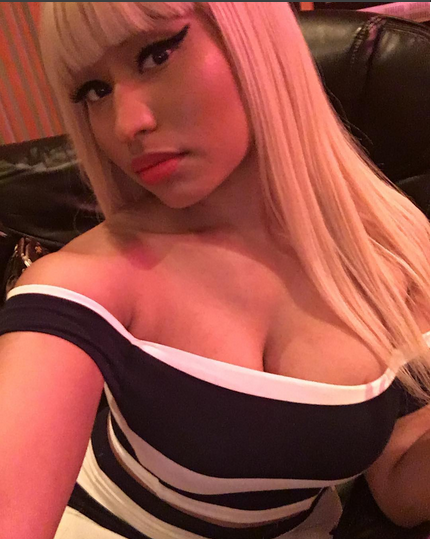 Nicki Minaj has gone and pissed a more then a few million of her fans, by doing the one thing you’d think a person had the right to do.  Which is remain, silent!

Thanks to an overly observant and emotionally distraught fan of Nicki, she had the time to tweet about a new song of hers; Although she has yet to make a statement about the Pulse Nightclub shooting in Orlando to her LGBT supporters and fans.

Tweeter Johnny post bove was what resulted in a snowball affect of criticism’s to come from plenty who of those in the LGBT community and hasn’t let up since. 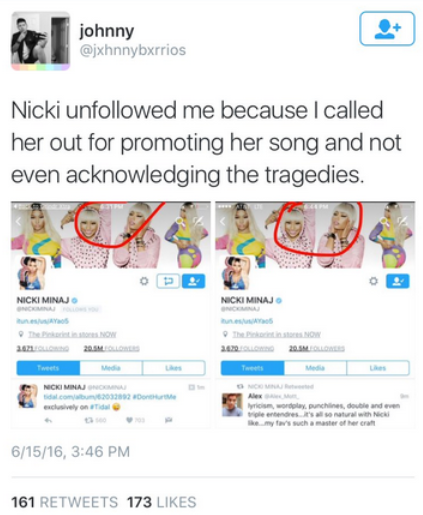 As the result from the backlash the tweet caused, Nicki went un-followed Johnny and in result he’d taken a screen shot and posted.  Since Nicki’s gay for pay has been put on blast, a lot of her supporters in the community are dropping her like a bad habit.  They’re insulted that based on the bi-sexual lifestyle she promoted heavily through her music early on in her career, how she herself couldn’t be vocal in the LGBT cause.

I can understand the frustration, but even if she were living out the lifestyle she promoted why must she be expected to speak on anything that goes on within the community.  I understand she has huge platform but you can’t delegate to one what they should do with it, I don’t care how much you paid for a ticket to see a show.  You can however affect change by not supporting that person any longer and see how that works out for you.

Go ahead and be a modern day Gandhi and support you cause.  But don’t do it at the expense of someone else’s beliefs or lack of support.  It’s plenty of celebrities who didn’t and haven’t spoken on the Pulse shooting as of yet and probably never will.  Did you check to see if your local stores, or eateries around town did the same.  I mean if your going to start calling people out, might as well get a list together.