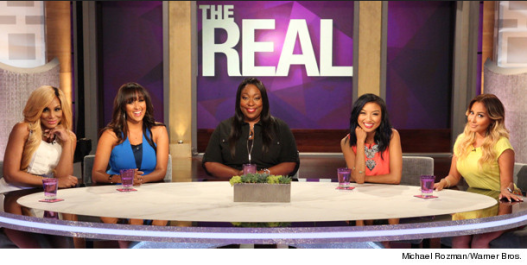 Tamar Braxton sits down with “Steve Harvey in The Morning Show”, for first interview since being let go from “The Real”.  She gives the full details on what transpired on when and how she found out.  Also she gives Steve & Shirley a glimpse of what’s to come.

I think “The Real” made the biggest mistake letting Tamar Braxton go, because she was the one good thing they had going  on that show.  She was the one with the most fans, accolades and style.  I love Tamera but when it comes to someone being genuinely who they are, Tamar takes the cake!

Tamar want’s all the haters who hollered she was dropped from her record label too.  That the Devil, is a lie!  (Comes in at the 11:00 mark)

Tamar allowed Steve to do the honor in  announcing her big news (11:45 Mark)  and it took everything in her to hold back a grin as he spoke and the drum roll played in background.

So as of now Steve and his production company E.112th Street/Endemol “One of the fastest growing production companies” have signed Tamar Braxton to Produce her own “Talk Show & TV Series”.  He thinks she’d make a great Talk show host,  game host and a plethora of other things their going to get her involved in.

I greatly enjoyed this interview, there’s nothing like going through adversity and coming out on the other side a winner.