Late nights buxom-beauty Amber Rose is taking her fame and talents to be featured as a dancer on this seasons Dancing With the Stars.   Rose  has been partnered with the daringly handsome Maxim Chmerkovskiy,  you know the one who had Tamar Braxton husband Vince all insecure and worried when he wrapped those sexy arms around her body.  And I have to say they partnered him with the right one hopefully, considering Amber Rose claims she’s not the Freak everyone thinks she is.  I wonder how much passion will he pull out of Rose on this seasons ‘DWTS’?  As Max has been known to melt a few panties, (mummbles: ‘Mine included’.)  #IJS and Amber’s not bad looking herself. 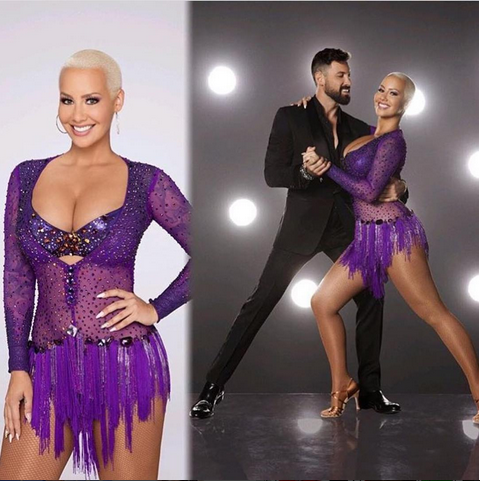 I hope to see a lot of latin forbidden dances and some nice slow grinding moves in hopes that they switch it up and have a game-changer  this season.  I think Amber will have a long run on ‘DWTS’ if she listens to Max, take his direction and not be afraid she could win.  I haven’t even seen them dance yet, and they both have my vote.  Just for looking that hot together!  I generally don’t watch Dancing With the Stars but I’m definitely tuning into to this season on ABC.