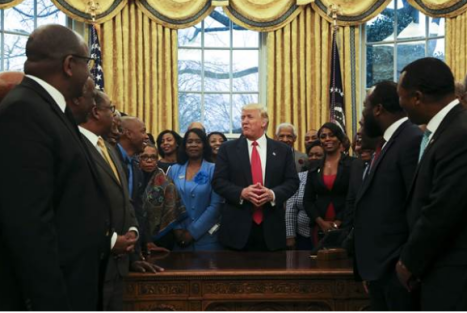 Trump’s done what Obama failed to do and that’s to reach out and help HBCU’s and Colleges in America to go down a better path.   Now will you give this man a particle of a chance, in trying to get some effective change in America.

This took part yesterday 02/28/16 and the sad part about this historical moment is that Black Twitter & Social Media they overshadowed it with a photo of KellyAnne Conway sitting with her knees on the couch.  SMDH… That’s why I don’t rely on Social Media and the fools who post on it. 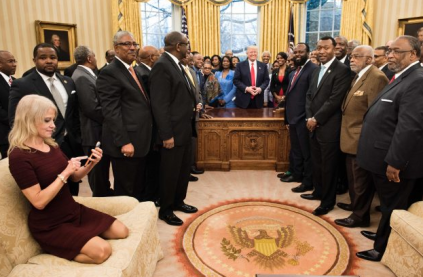 According to NBC News:

Though the HBCU executive order was similar to several signed by past presidents starting with Jimmy Carter, there was a noteworthy difference. Trump’s executive order moves the White House Office of HBCU Initiatives out of the Department of Education and into the Executive Office of the President, a first of its kind delineation.

Another noteworthy aspect on the White House visit of over 60 HBCU Presidents this week was that a routine photo-op President Trump held with HBCU Presidents in the Oval Office may have been historic.

Take Note in the difference of these photo’s , Trump meets with Educated Black Folks.  While Obama all he invited was entertainers and artist whilst in Office.  You rarely saw him in a room with an educated black person, much more a room full of them.