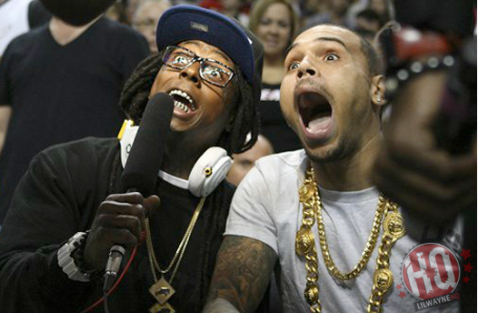 Entertainers & Hip Hop Moguls Chris Brown & Lil Wayne both have some explaining to do, when it comes to there associating with a suspected drug dealer.  He fingered the two while in questioning with the FED’s,  I mean what else do you expect?  He wanted a reduced sentence and whom better than an high profile celebrity or any black man at that matter to turn in or dry snitch on.

Miami music producer Harrison Garcia, on trial for federal drug charges, used Instagram to upload photos of himself posing with exotic cars, stacks of cash, and rappers Chris Brown and Lil Wayne.
But investigators believe he did more than just party with the hip-hop stars.

Federal authorities on Thursday revealed they are investigating a $15,000 wire transfer last year from Brown to the bank account of Garcia, who boasted that the money was for drugs and the popular cough syrup-and-soda known as “lean.” And Garcia, when he was first arrested last October, confessed that he sold Lil Wayne “a lot of narcotics,” a federal agent testified on Thursday in Garcia’s trial for drug dealing.

Pressed for more details by Garcia’s defense attorney, the agent declined to say more.
“It’s still an open investigation,” U.S. Homeland Security Agent Kevin Selent testified. “I can’t talk about it.”
The revelation came on the third day of testimony in the trial for Garcia, the 26-year-old who agents believe sold drugs to buy a fleet of luxury cars, a cache of firearms and scores of high-end sneakers, bags and hats.
Garcia’s lawyers, Gustavo Lage and Percy Martinez, have suggested that Garcia was not a drug dealer but was only showboating to build a social-media following, using the guns “as props” while dealing with an addiction to the drink made from promethazine with codeine.
They’ve also suggested that agents were using Garcia to notch a “feather in the cap” by going after bigger names — specifically Brown and Lil Wayne.
That the rappers might use drugs would be no surprise. Like more than a few rappers over the years, they’ve used their music to celebrate weed and the soda brew also known as “purple drank” or “sizzurp.” Lil Wayne even suffered seizures after apparently drinking massive amounts of the cocktail, the celebrity gossip website TMZ reported last year.
But until Thursday, the federal government had not revealed any probe into their drug activity. Efforts to reach representatives of the rappers was not successful on Thursday.

We can only hope that their high pried lawyers have enough stout to keep them both out of  Prison.  Maybe O.J. can refer a dream team.  I doubt they do time either way, shouldn’t be hard to prove how them innocent.