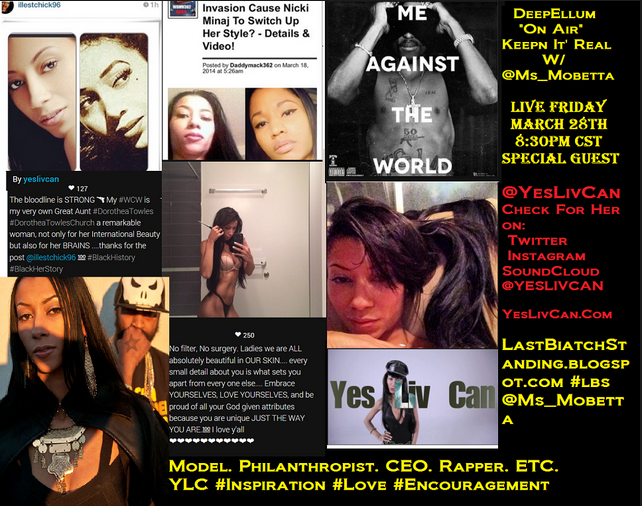 It was an Honor, Interviewing Liv.  It’s hard just saying Liv because the “Yes” and “Can” is what solidifies everything about her spirit.  Yes, simply Because there’s nothing this sister “Cannot” do, so why even use that word in her vocabulary.   So “YesLivCan” it is and I dare you to tell her otherwise.  YesLivCan has a flow that “Doesn’t make you think of anybody out there in the game, male or female, very incomparable and that’s what I love about her.

She’s in her own element and every word she speaks is with purpose and that’s a lot of what missing in the game, she allows herself to be feminine and gets her point across with her flow, she doesn’t need to channel some demon into her called “Roman” to get amped up to say some shit.  I’m just saying you have to really be on something to intentionally listen to her crazy ass, its one thing to sit through a Nicki Minaj song in the club or in the car.  But too intentionally go buy this chick’s music, go to her concerts and purchase her endorsements and deals.

Wow, I’d never and I’ve never purchased anything with her name on it.  I almost hate evening mentioning her name on the same page as @YesLivCan but part of why I like her so much is her exposing Nicki’s Whack ass! Like not many could or can do it, and she can do it and speak on it because she was there from the beginning she knows the truth, Liv just know’s Truth! She speaks it with every word that fly’s out of her mouth on every song.

So Excited to be sharing her music and herself with you..Hit Play
“Every bar that’s spit is another lesson learned