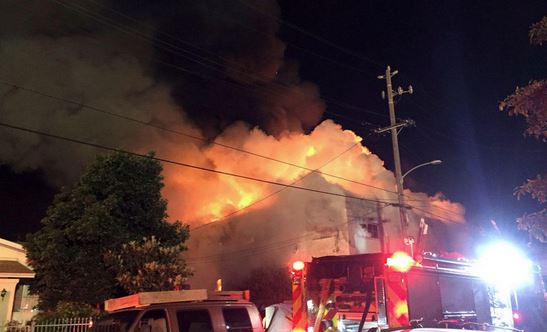 This tragic event which took place late this past Friday night, is the main example as to why I don’t jump up and go anywhere without any thought of my surroundings.  And when I do go places I scope out the nearest exits and tend to stay close by them..According to the NYTimes:

OAKLAND, Calif. — Anguished family members awaited news of the fate of dozens of people still unaccounted for on Saturday after a fire gutted a makeshift nightclub in Oakland, leaving at least nine people dead.

In one of the deadliest structure fires in the United States in the past decade, partygoers at the two-story converted warehouse were asphyxiated on Friday night by thick black fumes, which poured from the building’s windows for several hours. Survivors stood across the street in a Wendy’s parking lot, watching firefighters try to put out the blaze and rescue those inside.

Oakland officials said the building, a rambling warehouse they described as “a labyrinth of artist studios,” had been under investigation for several months. They said escape from the building, which had only two exits, might have been complicated because the first and second floors were linked by an ad hoc staircase made of wooden pallets.

By Saturday afternoon, a list of those missing, compiled by friends and family, had grown to about 35 people. Officials said that the nine bodies recovered were in areas accessible to rescue crews, and that they had not been able to search the rest of the smoldering, unsafe building for at least two dozen people still missing and feared to be dead inside.  Read Rest of Article Here..

Our Prayers go out to to all the Friends & Family members who were affected or associated with the loss of their loved one….