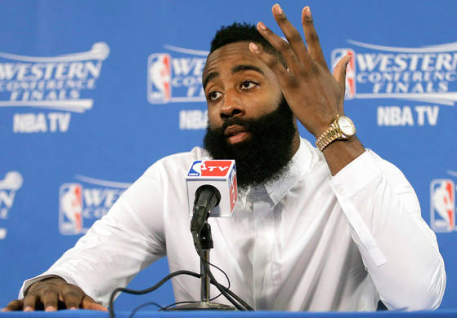 When Khloe Kardashian & James Harden abruptly ended there 8 month relationship abruptly out of no where last year, rumors started swirling as to why.  One rumor reportedly that stuck in the minds of Khloe’s fans was that James cheated on her.  Well James Harden sat down with a Sports Illustrated reporter and sets the record straight.

The process of untangling a crowded life began a year ago, when he and Khloé broke up after an eight-month romance, which began with a meeting at Kanye West’s basketball-themed birthday party at Staples Center in June. Harden does not reference Khloé but reflects on the tabloid apparatus that accompanies her.

“I didn’t like all the attention. I feel like it was for no reason. I wasn’t getting anything out of it except my name out there and my face out there, and I don’t need that. It wasn’t uncomfortable, but it wasn’t me. I don’t need pictures of myself when I’m driving my car. Who cares? What shoes am I wearing? Who cares? Where am I eating? Who cares? It was unnecessary stuff that I think trickled down to my teammates. I had to eliminate that.” – James Harden

James Harden & Khloe at a Chipotle in Houston when they were dating.

Who can blame James?  Who want’s to have camera’s follow and report their every move all day, other than the blood sucking vampire he was dating?  I’m just saying, she’s been doing this for a long while now, she could care less what other’s think about her.  Because her lively hood depends on people talking about her good or bad.  James on the other hand has an image to maintain and he can’t get caught up in the drama, for all we know this is the milder explanation.

I honestly don’t think he could handle the fact at the time she was still helping Lamar out, because of his health issues and that might have caused some confusion in their relationship.