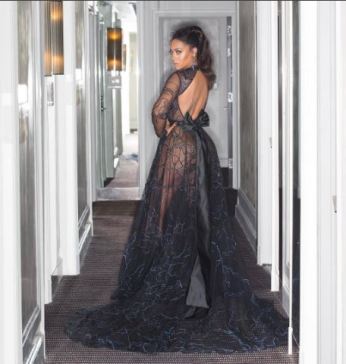 Lala stepped out to this years Met Ball Gala in a stunning see through gown and beat by the Gods.  Her look even came with a side of shade to her newly estranged husband Carmelo Anthony.

If you haven’t been in the loop, supposedly he’d gotten a high class groupie pregnant behind her back.  Of course he wasn’t gone do it in front of her face, lol I just needed to clarify she wasn’t present when this happened.  I mean let’s not pretend there wasn’t rumors they had an open marriage and were even rumored to invite other women back to their bedroom.  Or a bedroom…

Being that they are married that’s cool if they wanted to do that, its that he broke the rules in seeing this chick behind LaLa’s back and to do it unprotected was the biggest slap in the face.

Whelp at this weeks Met Gala standing there in all her beauty she served shade by wearing a ring on every finger except her wedding finger.

Some would say it was Petty, but those are the one’s who don’t have a Husband more than likely.  And if they do he probably aint worth shading anyways. lol.