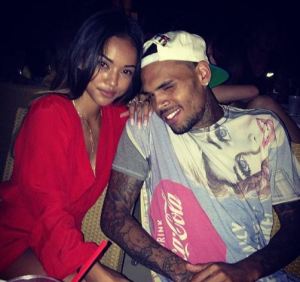 Whelp, today turned out to be the day the Karrueche & Chris Brown Court room melodrama came to an end.  After reviewing all the evidence submitted to the court and hearing Karrueche’s testimony, the Judge assigned went ahead and granted Tran a 5 year Protective Order against Brown.   I have questions & theories, I’d like to run past ya.  So Read on..

Chris Brown threatened violence against his ex-GF after they broke up, demanding she give back money and gifts he had given her during their relationship … this according to Karrueche Tran‘s in-person testimony in court.

Karrueche took the stand Thursday in her restraining order case against Chris, telling a judge after she broke up with the singer … he demanded diamond rings he bought for her to be returned. When she refused … Karrueche says Chris became aggressive.

Karrueche explained that in text messages between herself and Chris post-breakup, he would say things like “I’m not being nice to you no more, if I see you out in public again and I’m there I will make you hate me even more, don’t be anywhere I’m out in public, I’m going to ban you from all events.”

She claims he also texted her more violent threats like … “I can get my money back and I’m tired of playing games” as well as “Bitch I will beat the s**t out of you” and “I promise you I will make your life hell.” She says he also once wrote “Imma kill blood” under a photo of her and actor Michael B. Jordan.

Ok, so first question I have is “Who does Karrueche think they’d prefer at the Grammy’s?” An actress without any musical talent or Chris Brown an idiot savant of our time in music, dance & art.

What club is going to ask Chris Brown to leave for Karrueche?

Think about it, it’s plenty of times they ended up in the same place at the same time.  And if it truly came down to Celebrity and who would buy out the Bar with a team, lets just say any owner in their rightful mind is going to go for the big money.  They’re not going to chance offending Chris Brown and chancing him never coming back, for Karrueche.

I’m not saying this to be a bih, I’m just being honest.  Karrueche may have just made Chris Brown threat of being kicked out of places, because of him come true.  You can be sure she may not ever see another BET Red Carpet event, or anything that surrounds music and him being there.

Now these are all just questions & theories,  we’ll allow a few more months and events roll bye than come back and update what’s transpired so far.