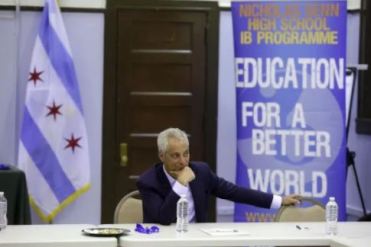 Chicago high school students may soon need to create a plan for their future in order to graduate.

Mayor Rahm Emanuel appeared on “CBS This Morning” on Wednesday to discuss his new proposal, which would require students to develop a post-high school plan before receiving a diploma.

Chicago would be the first city to adopt such a requirement if the measure is approved by the city’s board of education.

“We live in a period of time where you earn what you learn,” Emanuel said. “The school system of K through 12 is not applicable to the world and the economy and the world that our high school students are graduating to. So we’re moving to a pre-K to college model.”

Under the proposal, all Chicago Public School students starting with this year’s freshman class would have to show an acceptance letter to a four-year university, a community college, a trade school or apprenticeship, an internship, or a branch of the armed services in order to receive their high school diploma.

Not to say this isn’t a start of a great Idea, but I think it should be more voluntary if anything.  Sort of like a program students decide to join and it gives them great benefits, like offering more classes that can be transferred over to College Credits or a program.

I think the program should offer summer internships and on the job training for those who sign up.  But to say if you’re not headed to College or the armed forces, you can’t graduate is ludicrous.  What do you think?