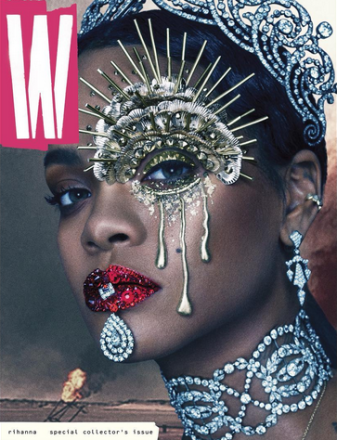 Rihanna’s face has again landed on another ‘W’ Magazine cover and couldn’t look more beautiful.   Of course this photo above is heavily photo shopped, as she doesn’t have all the fancy make up the photographer want’s us to believe. Beyond that she looks gorgeous, see more photo’s from the glamorous and very daring photo shoot below. 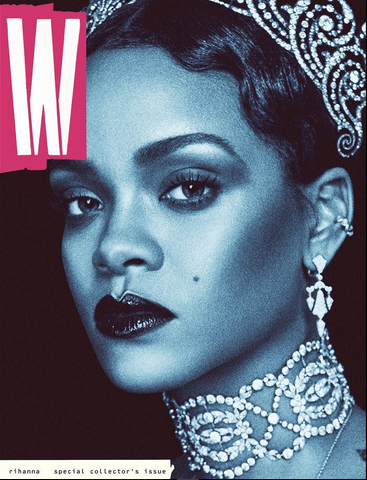 Photographs by Steven Klein, Styled by Edward Enninful
You see this is the same photo as above, except in black & white and RiRi looks flawless.

Of course its clear in what concepts the photographer and the creative director decided to emphasis in this shoot.  As you can see they chose to dress her in what appears to be non-binary fashion and hair style.  Meaning a man or a woman in today’s age could wear it. And if I didn’t know who Robin Fenty (B*K*A Rihanna) I’d of never guessed that was a woman in this photo.  It doesn’t help that the color tones they chose, the background and the mix of everything else aesthetically going on in the photo above, it’s makes it hard to see what’s happening.  It took me a moment to notice the muzzled dog to the top left hand corner.

This photo is a nice transition from the last and it gives a better understanding, being now Rihanna has the dog on the leash & he’s now un-muzzled.  Meaning now she’s in control & she has a dog in the fight that’s not afraid, vicious  even. And with that Stance Rihanna’s in you can tell she’s ready for war.

This picture say’s it all, it read’s now that’s she conquered the world, she has transitioned from owning animal’s that would fight for her to actually humans.  So this if anything is an homage to the Rihanna Navy.