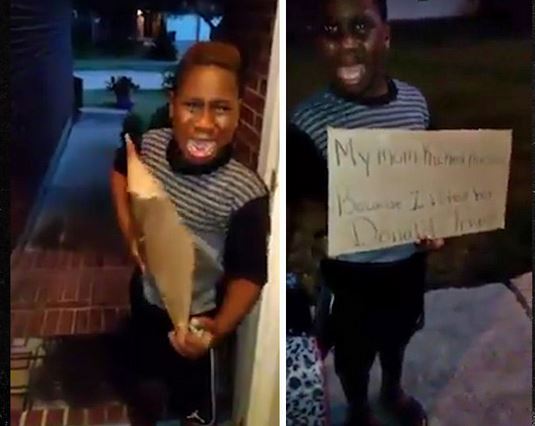 I remember seeing the video of this woman putting her poor child out after she found out he had voted for Trump in a mock Election at school and all I can remember was the anger that boiled inside me.  This little boy is all of  7 years old, and the fact that she curses him and calls him a Trump Lover as though he voted with any type of reasoning other than that of his own.

Which is that of a child, so I’m not going to speculate what he could have been thinking when he did choose Trump.  But that’s besides the point, you’d of thought his vote had counted for the election how she was going on.  Went as far as packing a bag and making a sign or him and putting her own seed out on the curb, telling him that’s where he was going to live from now on.

Now CPS has stepped in and launched an investigation and all I can think is, who didn’t see that coming?  I sure did.  I remember watching the Video in disgust thinking to myself someone needs to check on that little boy’s mental welfare, she put him through unnecessary stress the day before school.  And no telling what type of Mental abuse she continued on with days after the incident considering she, herself was so distraught he voted for Trump in a Mock Election.

First off were all Americans and instilling in your children that they don’t have a choice but to like what you do, is you taking away their freedoms.   If she wanted him to understand what she thought was wrong with his decision, she should of sat and talked with him privately in a less demeaning tone.  You know how one’s mother would speak to them if they loved them.  I think her frustration came from the fact she didn’t know how to verbalize why she didn’t support Trump.  So that pissed her off even more.

HOUSTON — A Texas mother is being investigated after posting a video online of her young child being thrown out of her home after he told her he voted for Donald Trump during a mock election at his elementary school.

On Friday, the cell phone video went viral on Facebook with more than 10 million views in less than 24 hours.

Many people have commented on the video, saying the mother should be in jail. We spoke with neighbors who say the video is shocking.

“I can’t believe a mother would go against her son like that and put her kid through that much trauma. That’s awful.” said Mike Terry, a neighbor.

The video shows the mother’s reaction to learning her young son voted for president-elect Donald Trump in a mock election held at his elementary school.

“Since you voted for Trump, you can get your sh*t and get out. Uh uh, the suitcase is packed by the door.” the woman says at the beginning of the video.”