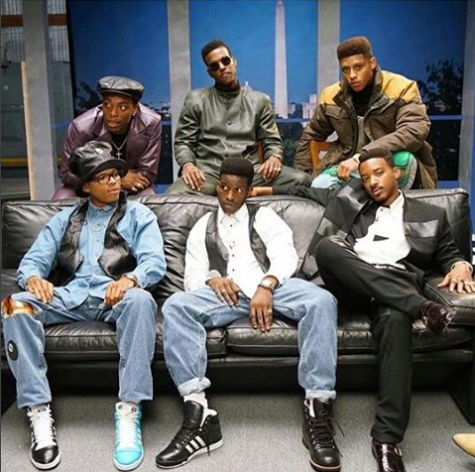 The anticipated New Edition Story Premieres next week on BET, and it’s set to be a spectacular 3 night mini-series that airs on January 24th.

All the young girls are definitely tuning in to see Bryshere Gray as Michael Bivins and as far grown men go, for us ladies the rest of the cast aren’t so bad looking themselves.  Got sexy & soulful singer/songwriter Luke James as the equally sexy Johnny Gill.   The talented & handsome Elijah Kelley who’s had his fair share of nominations in film.  Full Cast list Here.

(Actual New Edition Members, Can you Name them Left to Right?)

New Edition has gone through a lot as a group and the fact they were able to work together in helping to put out their story and there not be some drama holding up the films release, is awesome.  And with the quality of writers and actors they chose, you can tell they were taking it seriously.  Because honestly either one of them could of been insisting upon one of their sons playing themselves, like Ice Cube did.  And in that case he didn’t make  a bad choice, as come to find out Cube son can act.

I’m just saying it could of been anything considering their volatile, confrontational past, with each other.  But I believe this movie is and will be a testament of how far they’ve not only come as a Group, but individually and spiritually.  There’s no doubt, I’ll be one of the several million who will have their eye’s glued on to the tv screen, watching what’s to knock the TLC story rating’s out the park.