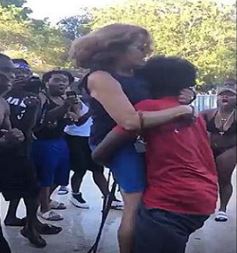 I’m happy that they’ve gotten the teen who’d done this to this woman, because I couldn’t stand thinking anyboy that ignorant was walking around anonymously.  I’m praying that now they know who it is, that its not to late to turn this child’s life around.  I think it will make for a lesson learned in regards to this thing called life.

(CNN) –A Florida teenager turned himself in to police after a video showing him dragging and throwing a woman into a pool was posted online, officials said.

The video was captured during a pool party Saturday at a residential community in North Lauderdale, the Broward County sheriff’s office said.

Video footage shows a woman walking into the pool area with her two dogs before some partygoers began surrounding the woman and taking video with their cellphones.

A red-shirted teenager then picks up the woman, but both of them fall to the ground. Within seconds, the man stands up, drags the woman and throws her into the pool, the video shows.

The woman, a 68-year-old who is a board member of the Players Place Homeowners Association, suffered injuries to her leg and shoulder, the sheriff’s office said.

She said she was trying to intervene on an unauthorized party at the community’s pool when the incident happened.

“We’re just asking them — just lower the volume,” the woman told CNN affiliate WSVN. “I didn’t care what they were doing. That’s not my job to police the place.”

The unnamed teenager turned himself in Monday afternoon. He has been charged with battery of a person 65 years of age or older, officials said.

“I messed up and I have to own up to it,” officials say the teenager told them.