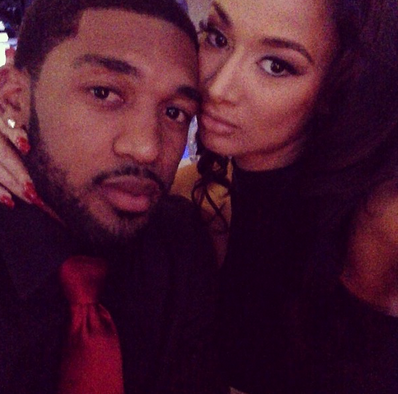 As of this week a Judge has lifted a restraining order that resulted from Orlando Scandrick reportedly fearing for his livelihood and life after he claimed, ex at the time Draya Michele not only physically assaulted but also threatened him on several different occasions. Once while in the middle of an argument, Draya got so mad she’d threatened to pour bleach into his eye, Scandrick claimed-Orlando Scandrick, “Draya is a Crazy Biatch”..

Also in the original complaint he mentioned where Draya blasted him in the face with Pepper Spray.  It’s a wonder any one of his friends or family likes her, considering you can basically say his eyes are an important part of his profession.  No offense, but there aren’t any blind players in the NFL.  Well, not literally anyways!

This order was placed in Texas last summer and since then they’ve had a baby boy in spring. Check out pics from their Baby Shower, they both attended-Draya’s & Orlando Scandricks Baby Shower

So it came as a surprise that news started spreading the Judge assigned to the case just dropped the order due to Orlando missing a scheduled court date for a review of the current restraining order.  I guess the Judge said he’s not going to play these games with the both of them.

Let’s just hope they keep it cordial and less news breaking the next time they split.  I doubt the Judge will be able to ignore anymore allegations of abuse coming from the two of them, especially not with a child involved now.  The overturning of the order is just on the heels of Scandrick announcing long awaited  return back on the field with the Dallas Cowboys-Dallas Cowboy Orlando Scandrick Announces His Return.

Update: My sister took the time to contact me on Facebook in my comments under this story to inform me the Order was overturned last summer.   I knew that it sounded to strange considering they’ve been around each other and apparently conceived and birth a child since then.   I just hope they’ve made it to a point in their lives, where this incident is just a distant memory.