Beyoncé has finally made it to her Paris stop in her European Tour after many TBA’s were announced due to the tragedy that struck on Bastille Day in Nice, France not far from Paris-Several Injured & Dead in Nice Bastille Day Attacks!, out of respect and security concerns of course. Beyoncé posted the pic of the family living it up in Paris, on her site Beyonce.com.  Photo’d above Jay-Z & Bey looking ‘crazy in love’ as they soak in the Parisian lights. 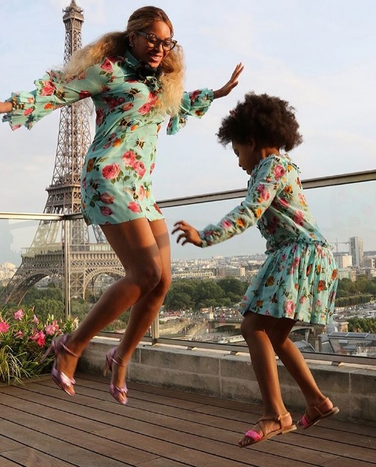 The Carter-Knowles Clan have taken up in the expensive & exclusive top floor Suite at the Shangri-La Hotel in Paris, France.  As you can see above, (If you didn’t notice in the first pic.) they have the Eiffel Tower in the backdrop of their room. Which is a gorgeous contrast of color to the beautiful garments Beyonce & Blue are wearing.  And Blue Ivy is definitely a model in the making-Blue Ivy Strikes a Pose For Aunt Solange, posing to take photo’s recently for her aunt, who couldn’t believe herself how serious Blue takes her selfies.

Someone made the stark comparison on them both looking like Arizona Original Green Tea Cans, and at first glance you’d agree. Except when you actually look at the can it’s not even the same foliage on there.

In the words of Tamar Braxton, ‘You Tried It!’

I just don’t want to believe that’s an actual phone Blue Ivy is holding a phone, but then again she is very mature & smart for her age.  She knows her mama is the baddest chick in the game without question and that’s she’s blessed.

After that Lemonade dropped you aint heard nothing else about Jay being a bad hubby, from what we can tell her got his a** in formation.  Because of his constant infidelity, in order to win her back Jay reportedly had to sign a post-nuptial agreement. This said agreement entitles Beyonce to a big stake in his fortune-If Jay-Z Cheats Again, Beyonce Get’s Half. 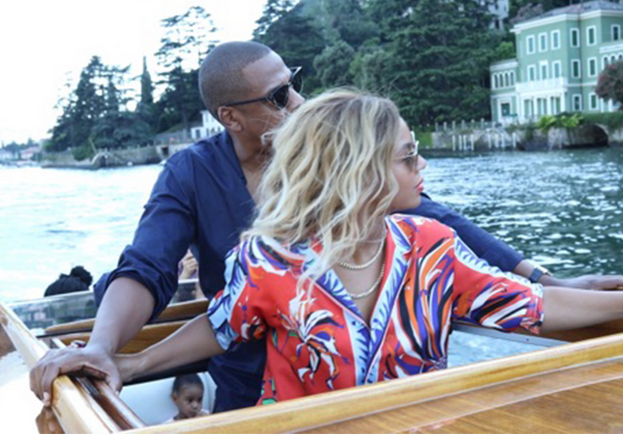 Blue Ivy in the background, sitting down being a well behaved child.  While Jay & Beyonce enjoy the view in the canals & rivers of Europe.  Now Kim & Kanye that’s how a child is suppose to act,  cause North has been filmed & photo’d in more then one hissy fit or tantrum in the past few year.  You can tell with North coming of age and being around her cousins Penelope, Reign & Mason who mama Kourtney don’t play she’s getting it together.  But nobody has it together as much as Blue Ivy, she’s a cultured little girl.

The Carters eating brunch overlooking the water as a family.

This photo Beyonce posted above of her posing in an elevator as Jay-Z takes the picture, has gone viral and plenty of memes and comments have been made because of it.