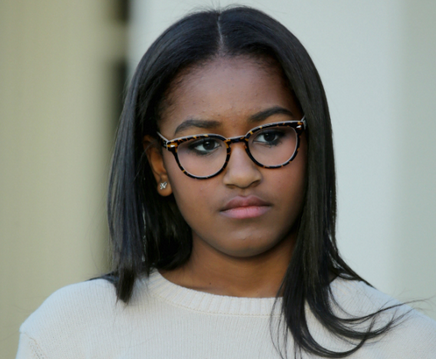 A tradition that was set in he Obama Household by eldest girl Malia, Barack & Michelle allowing them to have summer jobs & internships if they like.  For instance, Malia Obamas first job was a production assistant on the set of Steven Spielberg’s television series “Extant.”

I think its a great idea they get to live real world experiences, considering they want them to have as normal of a teenage life as anyone else their age.  The Boston Herald has gotten the scoop on ‘First Kid’ Sasha Obama’s first summer Job and all I can say is its awesome she chose something so ‘down to earth’.

Sasha Obama, who has lived eight of her 15 years in the luxurious confines of the White House, is learning how the other half lives this summer. The First Daughter is working the takeout window at Nancy’s, a seafood restaurant on Martha’s Vineyard.

Sasha, who’s using her full name of Natasha at Nancy’s, has been learning the ropes of the service industry at the Oak Bluffs eatery this week, working a cash register, busing tables and prepping the restaurant before it opens for lunch.

“She’s been working downstairs at takeout,” said a server at the busy island eatery. “We were wondering why there were six people helping this girl, but then we found out who it was.”

Sasha was accompanied to her summer job yesterday by a contingent of six Secret Service agents, who sat outside the restaurant in a large Suburban SUV and on the takeout benches while the president’s daughter waited on hungry tourists. When her shift ended, Sasha and a friend, who also was wearing the navy blue Nancy’s T-shirt and baseball cap, brought a tray of drinks out to her security contingent, got in the SUV and took off.

Nancy’s is a favorite stop for the First Family, who always pop in for a seafood feed when they are on their annual Martha’s Vineyard vacation. The Obamas reportedly are friends with Nancy’s owner Joe Moujabber, which is how Sasha scored her summer gig.