Singer/Song Writer Joy Villa has gained a whole new following and appreciation for her musical talent after sporting a #MAGA Trump Dress to last nights Grammy Award Ceremony.  And has been reaping the benefits.

Just in the last 24 hours sales from her records and singles have been soaring-Joy Villa Record Sales Soar After Trump Grammy Dress..  On Joy’s Instagram alone she’d gain over 40,000 followers, “Heck! I Should Know, I’m one of them!”.  I get it! It was bold and endearing to those who do want to give Trump a chance as President.  Her statement was not only bold in her appearance but also in what she was quoted by Fox News as saying “I am 100 percent a Trump Supporter… I stand behind our President because that’s the American thing to do.” 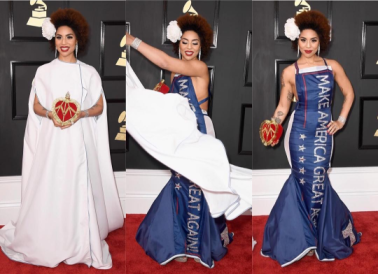 Chrisette Michele comes into play because she herself was in a similar situation, except she went and performed for President Trump –Chrisette Michele Inauguration Performance..  Along the same lines and plenty more justifiable, inalienable rights she had to do so.  And from what I remembered she went from 702,000 Instagram followers to 695,000 in one day.  Which in itself isn’t such a great loss,  I just don’t remember reports coming out 24 hours later saying how her record sales are soaring.

Thinking about the significance of both these women being of Color in America, who are willing to uphold their values as both a minority and a Citizen of America.  I have to ask “Why the Double Standard?” They both utilized their Freedom of Speech & Expression when it came to voicing their opinions and the fact that both had two different experiences in something so similar is disturbing to me.

Chrisette had family members who disowned her, Spike Lee coming out saying he wasn’t going to use her music.  Reportedly Lil Mo got fired for coming out in support of Chrisette Michele, which isn’t hard to believe.  Even though they claim it was for other reason’s as to why she was let go.-Chrisette Michele on Trump Performance “My Family Disowned Me”

I have yet to see any backlash from what Joy done, nor do I wish her any. Again, I just need to know “Why the Double Standard?”  Is it because she’s lighter than Chrisette?  Are people in Main Stream Media that Color Struck?  I think it’s because they weren’t sure what nationality she was and didn’t want to insult someone they barely knew.   Because up until now I hadn’t heard of Joy Villa, but I’m glad I did.  Maybe Chrisette & Joy can link up and do a tour together, and try bringing along like-minded performers.  I’d be down to come check them out and I believe there are plenty of supporters who’d come and do the same.  As all anybody want’s to do now a day’s is be around people with common sense and decency .